Our Journey So Far & Our Aims 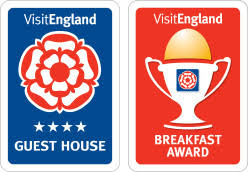 *Achieving 4 stars from Visit England in November 2009 was an excellent reward for all the hard work and commitment we put into upgrading throughout and making everyones stay a pleasant and comfortable an experience as possible so to gain 'Guest Accommodation of the Year in March 2010 after a secret assessment based on Customer Service by a mystery shopper was fantastic.
Keeping Kilbrannan running to this standard is hard work with the constant cleaning, maintaining and further upgrading each and every day, but it was the kind of hard work that we love to do as it is naturally in our nature.

*In October 2010 we were assessed by Visit England again, after which we were awarded a Silver Award which made us 1 of only a small handful of Guest Houses in Great Yarmouth at that time with such a high award.

*In November 2010 we were nominated for the Spirit of Enterprise Great Leisure and Tourism Business award. We were shortlisted as one of the finalists, then after attending the presentation evening, we won the award.

*In December 2011 we were re assessed by Visit England and as a result, retained our Silver Award but also earned a prestigious Breakfast Award which is fantastic.

*In March 2012 we won 'Guest Accommodation of the Year' for the 2nd time after an assessment from a mystery shopper.

*In June 2012 we were the 1st accommodation in Great Yarmouth to become 'World Host Recognised' as a result of our commitment to providing an excellent standard of Customer Service.

*We were assessed again by Visit England in November 2012 and retained our status of a 4 star Guest House with Silver award and Breakfast award.

*After being shortlisted as a finalist in the 'Spirit of Enterprise' Customer Service category in March 2013 we proudly won the award.

*We were again assessed by Visit England in October 2013 and happily retained our grading status.

*In May 2014 we were one of the first businesses in Great Yarmouth to be nominated by our customers as a "Yarmouth Great" for Hospitality (A competition held by local MP Brandon Lewis).

*In August 2014 we had an early visit from Visit England and proudly retained our grading status again.

*In November 2014 after being shortlisted as a finalist in the "Yarmouth Greats" competition we were awarded the 'Highly Commended' award as a hospitality venue.

*In November 2014 after being shortlisted again as a finalist in the 'Spirit of Enterprise' Customer Service category, we won for the 2nd time in a row.

*Also in 2015 we won Visit England ROSE Award for recognition of service excellence.

It is our aim for going forward to continue our hard work, carry on upgrading and maintaining Kilbrannan to its current high level and beyond.

Of course, we wouldn't have been able to achieve any of this without the support of our guests

Our guests are always our priority

Thank you all for your support